The South East Hunts Club kicked off the 2020 South East Area Point-to-Point season a week later than expected on Saturday with their meeting at Charing which saw Jack Andrews ride a treble.

The opening race of the day, the 2 mile 4 furlong maiden which had attracted 26 entries saw 12 runners line up for the starter with Francesca Nimmo trained Kenyan Cowboy and Nigel Padfield’s Howitsdone sent off the joint 3/1 favourites and it was this pair that fought out the finish. As local hopes of a winner dwindled with Cynthia Woods trained Bit Of A Legend and David Phelan trained Kilmaley both weakening over the final three fences Kenyan Cowboy and Howitsdone were left to race to the final fence twenty lengths clear of their nearest rival, Andrew Leyshon’s Cydercourt. Kenyan Cowboy ridden by James King who was only carrying 10-7 compared to the 12-0 carried by Howitsdone with Gina Andrews in the saddle was able to put away on the run to the winners post to deny Howitsdone by seven lengths, however Howitsdone looks certain to lose his maiden status soon.

The second race of the day was a veteran conditions race and saw 11 horses with a wealth of experience make their way to the start. The market favourite Nicholas Wright’s Burtredgipandgump led to the first fence but managed to send his jockey Kate Gowing crashing to the floor which in turn left Laura Horsfall’s Ballycahane ridden by Luke Scott and Sarah Ashby’s Double Whammy ridden by her daughter Mary Ashby both priced at 8/1 to lead the remaining runners. Double Whammy was still in contention with three fences to jump but was joined by Andrew Leyshon’s Kelvingrove with Tommie O’Brien in the saddle and David Phelan trained Generous Ransom who was been piloted by Jack Andrews. Generous Ransom is a course winner and took the inside line to the final fence and looked to have the race won. However Kelvingrove rallied on the flat and produced a late challenge but was denied by Generous Ransom by a short head. Double Whammy looked as if he was going to manage to take third place but a tired jump at the final fence saw Mary lose her balance and hit the deck which then allowed Phil York ridden Thomas Junior for Nigel Benstead take third place but a distance behind the leading pair who were already heading for the winners enclosure. Katie Featherstone owned, trained and ridden Winola came home in fourth ahead of the only other finisher Max My Boy ridden by his owner / trainer Hannah Jones.

The men’s open also saw the bookies favourite of the seven runners fail to finish as James Owen trained Silvergrove pulled up before heading out on the final circuit having led until the tenth fence and then weakening. Luke Scott ridden Follow The Paint took up the lead heading out for the final circuit with Alan Hill trained Man Of Steel hot on his heels. As the six remaining runners turned down the hill for the final time the pace increased and Lynn Redman’s Expedite and Follow The Paint both found the injection of pace difficult to keep up with. However both Streets Of London under Phil York for Nigel Benstead and David Phelan trained Full Irish slowly made their way through the field to lead three fences from home. Streets Of London appeared to have the advantage after the penultimate fence but Jack Andrews produced Full Irish in the run to the final fence to pull away by four lengths and take a second victory for the trainer and jockey combination. Full Irish’s owner Anthony Ward-Thomas had even more to celebrate later in the day as Highway One O two trained by former South East Area champion jockey Chris Gordon and ridden by another former South East Area champion jockey Tom Cannon won the Sky Bet Dovecote Novice’s Hurdle at Kempton Park giving Anthony Ward Thomas a Grade 2 victory to follow his success at grass roots in a Point-to-Point.

The ladies open race also saw the bookies favourite beaten. Having already saddled two winners David Phelan trained Peggies Venture with Gina Andrews in the saddle was sent off the 5/4 favourite but a mistake four fences from home saw Peggies Venture weaken and a further blunder at the following fence saw Gina pull the mare up before the penultimate fence. The finish was fought out by Libby Lawson trained 13 year old Don’t Do Mondays who was ridden by Izzie Marshall and 7 year old Darius des Bois with novice jockey Miss F Flinton in the saddle for trainer Jennifer Owen. Many expect the experienced duo of Izzie Marshall and Don’t Do Mondays to prevail but Darius des Bois wasn’t in the mood for adding another second to his form figures for 2020 having two already to his name and held on to a lengths advantage on the race to the winning post giving his jockey her first taste of success. Alan Hill trained Namako ridden by Georgie Benson was the only other finisher but again was the distance of the run-in behind the leading pair.

The conditions race saw the only Tom Ellis trained runner of the day Earlshill sent off at 3/1 whilst James Owen trained Midnight Cowboy was the bookies favourite with Rupert Stearn in the saddle. Midnight Cowboy made a bad mistake at the open ditch second time round and was at the back of the field two fences later by which point Earlshill with Lucy Burton steering had gained the lead. Earlshill made a mistake at the first fence coming back down the Charing hill allowing Hannah Grissell trained and Rose Grissell ridden Cooladerry King to move up beside him. The leading duo battled over the next two fence and a thrilling finish looked to be on the cards. However Cooladerry King couldn’t react as Earlshill found another burst of speed towards the last fence and had to settle for second some six lengths behind the winner. Chicoria and Harrison Beswick won the battle for third with Midnight Cowboy and Nigel Padfield’s Orchard Hill was the only other finisher in fifth.

The last race of the day, the restricted race had only attracted eight entries but seven of them headed for the starter in what proved to be the most incident packed race of the day. Gemma Cobb trained Iron In The Soul was an early casualty falling at the second fence. Bulfin Island who was prominent hit the fourth fence (first open ditch) and catapulted his jockey Caoilin Quinn to the ground, however his unseating led to a further casualty as Nicholas Wright’s Almost There managed to put a front leg through the reins of Bulfin Island. This could have resulted in a nasty incident for both horses and Almost There’s jockey, however it was the national ladies champion Gina Andrews in the saddle of Almost There and she was able to quickly and safely stop her mount whom she dismounted to untangle the horses. With only four of the seven runners left after only four fences the pace of the race settled and the bookies favourite Tinnehinch under Phil York for Tim Underwood led for much of the remainder of the race. Once again however as the remaining runners turned down Charing hill for the final time the dynamic of the race changed and three horses were still in with a chance of taking the victory. Tinnehinch was joined by Hannah Clarke trained Schiap Hill ridden by Charlie Marshall and Julie Wadland trained The Golden Rebel with jack Andrews in the driving seat. The trio took the third from home together before Schiap Hill and The Golden Rebel pulled a length clear of Tinnehinch approaching the penultimate fence. The pair remained side by side until turning for the final fence where The Golden Rebel managed to lose Schiap Hill from his tail and having taken the last safely stormed home eight lengths clear of Schiap Hill. Tinnehinch completed for third whilst Katie Featherstone’s Magic Symphony who had looked happy to complete in his own time for fourth blundered at the penultimate fence unseating Katie. 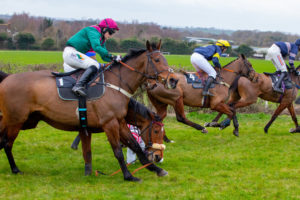