Carryonharry has passed away at the age of 24 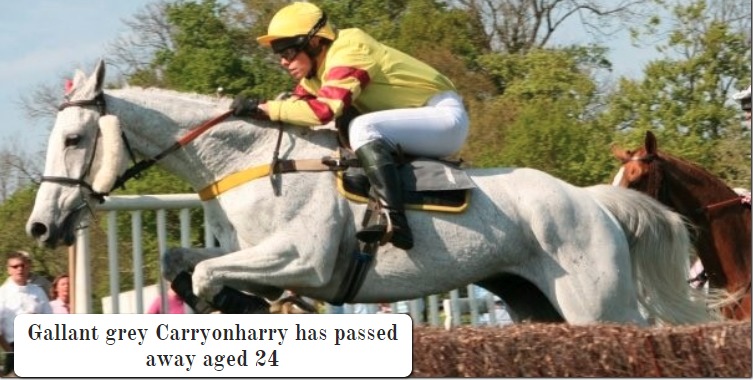 The extremely popular Carryonharry has passed away at the age of 24. ‘Harry’ was a local hero in the South East area in the 2000’s, winning 20 point-to-points and two hunters’ chases for owners Heather Silk and Richard Purkis, trainer Emma Leppard, and jockey Cynthia Woods (nee Haydon).

Harry started his career in the previous millennium, when he was trained by the Champion trainer of the time, Martin Pipe. Harry won four hurdle races, but he proved to be a magnificent jumper when sent over fences, winning five chases and running at the Cheltenham Festival on three occasions. In a career of 71 races his one jumping mishap came in the 2002 Grand National, where he didn’t take to the big spruce fences and fell at the first.

His form began to tail off in 2004, but it was in 2006, at the veteran age of 12-years-old that he joined Emma and his racing career really took off. He won three point-to-points in the South East that season, which were followed by a narrow success in the Ladies Open Final Hunters’ Chase at Huntingdon, before capping his season off with a facile victory in the Stratford Ladies Hunters’ Chase.
2007 was just as fruitful, with six point-to-point wins sandwiching a trip to the Cheltenham Foxhunters’.
At 14-years-old when most horses have reached retirement age, Harry showed no signs of slowing down and won five more races in 2008.
Incredibly, he went on to win three times as a 15-year-old and three more as a 16-year-old, following which he was retired.
After refusing to remain in his field and enjoy his retirement, Harry was brought back for a final hurrah at Godstone, where Rose Grissell was given the honour of riding the 17-year-old for his final two races.

Harry will be remembered amongst point-to-point fans for his remarkable consistency, whether it was heavy or firm ground, on a flat or undulating course, Harry would always try his best and usually win. He had a particular affinity for Godstone, winning seven races there in total and three of them as a 16-year-old.

“It was an absolute privilege to ride Harry and I will always be grateful to Heather Silk, Richard Purkis & Emma Leppard for giving me the opportunity to be behind those grey ears. Rest in Peace Harry, you took me to places I would have only dreamed of.”
​– Cynthia